Franklin Furnace’s mission is to present, preserve, interpret, proselytize and advocate on behalf of avant-garde art, especially forms that may be vulnerable due to institutional neglect, their ephemeral nature or politically unpopular content. 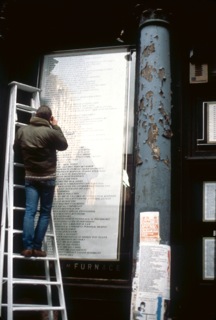 Tell us a little bit about Franklin Furnace and what you all are up to.

Franklin Furnace’s primary goal is to embed the value of ephemeral, avant-garde art practice in art and cultural history. We pursue this goal by providing grants to emerging artists so they may prepare major works. We then document this work, preserve its documentation and make it accessible.

How do you do your funding? Tell us about your approach and process, explaining how it is different from conventional philanthropy.

Support of emerging individual artists and collaborations through the Franklin Furnace Fund enables them to prepare works of art that invariably range beyond the boundaries of conventional art practice, changing cultural, social and sometimes political discourse.  Grass-roots support of such contemporary avant-garde art practice has a track record of making an impact:  Three of the “NEA Four”  artists of the “Culture Wars,”  Karen Finley, John Fleck and Holly Hughes, were Franklin Furnace Fundwinners, as was William Pope.L, whose 2002 retrospective at the Maine College of Art was denied National Endowment for the Arts (NEA) funding by outraged legislators. Franklin Furnace has no curator; each year, a new panel of artists reviews all proposals. We believe that this peer review system allows a diverse array of artists from all over the world an equal shot at presenting their work in New York. Each year we discuss anew what “performance art” is, and how “emerging” is defined.

How did your organization come to practice philanthropy in this way? What made you realize that Community-Based Decision-Making would be important for what you were trying to achieve?

In 1976, Franklin Furnace began collecting and exhibiting works of art that came to be known as artists’ books (a misnomer), and the history of the page as alternative space, as well as presenting installation work and performance art. What underlies all these apparently disparate forms is the desire of artists to broadcast ideas, often politically unpopular, socially confrontational or commercially unsalable ones. Once an artist asked me if his proposal had to be political to be accepted by Franklin Furnace’s peer review panel, and while no such rule exists, Franklin Furnace became known as a “free zone” where artists could present ideas that might not otherwise get a hearing. This went on for about a decade. We were under the radar, presenting art for mostly other artists to appreciate, with the support of the community of artists as well as state, federal and private grant money.

Have you ever been met with resistance or criticism? What specifically were the concerns, and how did you respond?

The jig was up in 1984, when the Carnival Knowledge collective of nine women curators was invited to mount “Carnival Knowledge: The Second Coming,”  which asked the question, could there be such a thing as feminist pornography? The Morality Action Committee informed our funders that we were showing pornography to 500 children per day. This was the beginning of the “Culture Wars,” when sex became the issue around which to galvanize taxpayer outrage.  Franklin Furnace got in trouble four times between 1984 and 1996, and each time it was for artists who took sexuality to be their subject. We became branded as an “obscene organization,” were audited by everybody, and at the end of the 90s went through a period of re-evaluation of Franklin Furnace’s purpose on the planet. During Franklin Furnace’s 20th anniversary season, we mounted our last exhibition in physical time and space, “In the Flow: Alternate Authoring Strategies,” curated by Daniel Georges.

During its 20th anniversary season, Franklin Furnace reinvented itself as a “virtual institution,” not identified with its real estate but rather with its resources, made accessible by electronic and other means. In the wake of the “Culture Wars” of the 1980s and 1990s, the organization made this decision in order to provide the artists it was presenting with the same freedom of expression possible in the loft during the 1970s.

What can you achieve through Community-Based Decision-Making that might not be possible using conventional philanthropic funding models? How does your funding practice affect the overall impact you are able to achieve?

Without our own equipment and because we did not want to own and upgrade equipment continually, in 1998 we began a partnership with Pseudo Programs, Inc. Together we presented a series of netcasts to a worldwide public, racking up 700 viewers per week! This is of course laughably small now, but understand Franklin Furnace had been presenting performance art to up to 75 patrons sitting on hard folding chairs. The facilities were also very constrained, because Pseudo had begun as an online radio station, but it didn’t take the artists more time than a heartbeat to adapt.

First, be proud of your niche in the community.  Franklin Furnace funds the “weirdest of the weird,” and is known as a safe harbor for contemporary avant-garde artists to propose their wildest and craziest ideas–some of which get selected for funding!

Why does Community-Based Decision-Making matter to you?

Performance art is good when it comes out of a stark passion within the being of the artist who must say this or die. Many of the things artists rail at — war, poverty, abuse, sexism, racism, AIDS — are ugly things that are all too universal. I thought it was particularly interesting that during the “Culture Wars”  in the United States, artists were saying exactly the same things they were saying before the legislators started pointing their fingers at us. Artists want to change the world and Franklin Furnace’s funding of individual contemporary avant-garde artists may have done just that.