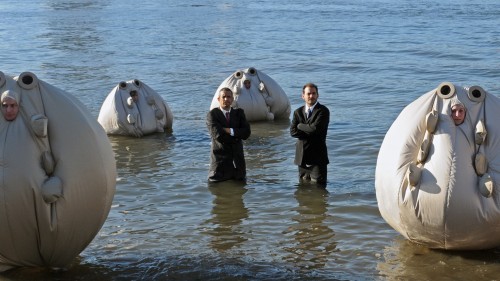 Creative Activism can make a major media splash with a little funding and lots of ingenuity.

How do you do your funding? Please describe the Action Switchboard approach and process, explaining how it is different from conventional philanthropy.

Part of the Action Switchboard is devoted to helping individuals and NGOs find resources for media-savvy direct actions (which we call Schemes). The resources needed aren’t always monetary; Scheme leaders can define skills, tasks, and objects they need donated from our international community of more than 50,000 activists. But when money is needed, we have integrated a shareable Kickstarter-like funding service to allow individuals browsing the platform, or supporters who have been emailed a link, to donate any amount to help a group reach its funding goal.

The Action Switchboard also offers supporters a Goal Funding option. Drawing on an “innovation funding” model, pools of money help activists pursue promising yet experimental projects geared to addressing a particular issue area or campaign. In one go, a private individual or foundation can fund the development of multiple Schemes to make headway on a specific area of concern.

How did you come to practice philanthropy in this way? Were you influenced by another organization, model, or funding philosophy?

The idea for the Action Switchboard evolved over many conversations between the Yes Men and the various activists and NGOs with whom they partnered on creative direct actions over the years. In 2010, the Yes Men founded Yes Lab, a training organization to teach creative activist tactics and help usher projects to completion. But with few staff and limited time, they couldn’t possibly take on all the great project ideas that came their way. It also became far too difficult for Yes Lab staffers to raise money for each project individually, which was their model at the time.

They thought of all sorts of ways to scale up. At some point they realized that their most useful asset, a database of over 50,000 activists from all over the world, could be the answer. Could they create a system that allows the people in their database to interact with one another and get help for their projects? Instead of taking on the burden of fundraising for each project, could this system ease the process so that anyone could do it? They started talking with Glocal Cooperative, a group of developers devoted to free and open source technologies who came together during Occupy Wall Street. They understood that while the technology existed to create exactly the kind of online platform the Yes Men dreamed of, it was vital for the system to retain elements of in-person facilitation, a key component of the services offered at Yes Lab.

This resulted in the Action Switchboard. The online platform automates lots of elements of action design and resource procurement, but also promises a one-hour brainstorm with a veteran Yes Lab facilitator for every new project launched. It also allows us to map the overlapping goals and issues of a broad array of actions, which can help bring about unlikely partnerships and identify points of political leverage. The latter also opens doors to the involvement of larger organizations that might prefer to support numerous actions fighting for similar things.

Have you ever been met with resistance or criticism when using this type of funding? What specifically were the concerns, and how did you respond?

We’ve heard two related concerns. First, that if you allow activists to raise money on your platform, no matter how much, you are ultimately responsible for the content or actions they produce. We’ve addressed that with a very clear Terms of Service statement that sets out strict conditions for our relationship. Second, we have heard the concern that with so many ongoing Schemes, it will be too difficult to get accurate reports on how funds were used. But the Action Switchboard does include a reporting mechanism geared to helping people communicate the successes and challenges of their Scheme-building process to the larger community. Built into this is a method for reporting expenses when money was raised using the platform. This reporting mechanism will enable us to improve facilitation and better understand what makes a successful Scheme.

Determining how Schemes would receive funding from donations was one of our initial challenges. We had decided to use Dwolla, a payment processor which is not only built on an open platform, but is backed by a credit union. Once we set it up, we had a tough choice to make. Would each Scheme leader raising money on the Action Switchboard receive money directly from the people donating? We thought that wouldn’t allow for enough accountability. Instead, would Yes Lab accept all the money first and then re-grant it to Scheme leaders? That would create additional paperwork and administrative overhead. Depending on how much was raised and since funds were going to individuals, we’d have to issue 1099s to Scheme leaders. But we bit the bullet and chose to regrant, knowing that it could, when necessary, allow us to keep better track of how the money was being used and hold Scheme leaders accountable for spending decisions.

What can you achieve through this type of funding that might not be possible using conventional philanthropic funding models? How does your funding practice affect the overall impact you are able to achieve?

This is an experimental model because we are enabling funds to go directly to individual activists. Instead of requiring people to be incorporated or fiscally sponsored, we allow a certain agility with respect to activist projects. With years of experience producing these kinds of things, we know just how necessary that can be.

The Goal Funding model allows an organization to fund the development of multiple Schemes within a particular issue area. For example, a foundation hoping to spark public debate on the dangers of industrial agriculture can support additional facilitator time and a well-promoted brainstorm meeting to start new Schemes for that campaign. Furthermore, it will help build a pool of funds to support those Schemes once they reach a certain stage of development.

These funding models – microgranting and innovation funding – when integrated, can offer the kinds of support needed to spur new on-the-ground activity around well-considered activist goals.

What is the most important insight you gained specifically through funding in this way?

Truth is, we don’t have enough data yet to answer this question. But in general we are hoping to encourage foundations to spread the wealth more: give many more, smaller grants. Reporting requirements, among other things, tend to prevent foundations from taking this route. With the Action Switchboard, we have created a platform that can, at once, highlight activist projects worth funding with a few hundred up to a few thousand dollars, and make reporting on the outcomes easy. Evaluations will be provided by grantees in dialogue with an Action Switchboard facilitator, and posted publicly on their completed Scheme page so that other users can learn from what they’ve accomplished.

In developing the Action Switchboard, we have turned the focus away from ourselves, choosing instead to feature other folks doing great work. This is risky, but it is far more fulfilling for our mission and for ourselves. We are doing this because it’s necessary, because we know how hard it is to raise money for smaller projects, and we’ve seen how these small projects can have a huge impact on national discourse when done right. Our goal is nothing less than to inundate the broad public with options for direct actions on issues they care about, and to push millions of potential activists along the path from knowing that things need to change, to taking meaningful action for change.