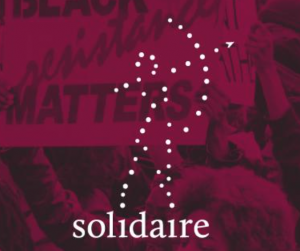 Solidaire aims to organize financial resources to social movements for systemic transformation. We are a community of individuals seeking to leverage our resources and privilege to support grassroots organizing and movement building, by building progressive infrastructure, creating structures for aligned giving and strengthening relationships between movements and donors.

As a community, members of Solidaire have an opportunity to participate in three kinds of funding: collaborative, aligned and rapid response. All of our funding is directed to supporting social movements and is done with an awareness of the ways in which philanthropy often undermines movements. Traditional philanthropy can tame revolutionary vision, create competition between groups and incentivize short-term thinking.

We hope instead to encourage visionary activism, support collaboration, and invest in the process of organizing that builds towards long-term change.

We do a significant amount of our giving in community, in order to learn from one another and create a shared understanding of some of the most visionary work going on in the country. We also use our listserv to exchange ideas and questions, in addition to funding the too-quick/too-small/too-risky: the otherwise unfundable.

Solidaire was created through the convergence of several streams of thought. Social justice philanthropy is constantly reinventing itself, as finding funding for grassroots organizing and the work of the most marginalized communities always remains a challenge. We were part of a conversation about increasing funding to these groups, along with the EDGE Funder Alliance and other progressive funders. But Occupy Wall Street was the catalyst for us. During Occupy, resources were needed and a number of funders and donors sought to get involved, but it was unclear how to support the movement in ways that would really be helpful. Confusion abounded. So we began as an effort to better understand how to support movement moments, like Occupy, but also with a commitment to funding the movement infrastructure – the organizations that would provide the capacity to sustain the energy in “moments of the whirlwind.”

Have you ever been met with resistance or criticism? What specifically were the concerns, and how did you respond?

We have a strong theory of change, with which some may disagree. We believe building power in the communities most affected by structural injustice is critical to creating lasting, progressive change. We look back to movements like the struggle against apartheid in South Africa, the women’s movement internationally or the Civil Rights movement in the U.S., and we see people getting organized, building institutions and fighting for their rights. We believe that this is a critical piece in the puzzle of creating change—but not everyone shares this perspective. Some are more policy oriented, focused on the power of Washington. Others are interested in the role of business and socially responsible investing. While we think all of these are important tools, we are committed to grassroots organizing and movement building as the centerpiece in building a world that is just for all.

On of our core strategies is to build community among donors and funders who are politically aligned. This is challenging in space and time. We hold monthly salons in New York City, but we have not yet been able to create equally substantial programming around the country. Secondly, funders and donors often have many demands on their time. One of the best solutions for this problem is our listserv which remains an important space to connect around issues of shared concern, even if we cannot be together physically.

Our funding works as a form of political education and shared learning. By moving a certain amount of money collaboratively, we have an opportunity to increase our impact — leveraging a small amount to move a larger amount together. But it also provides us with an opportunity to discuss our values, share our decision-making processes, and learn about the lay of the movement landscape around the country.

What’s the most important insight you gained specifically through funding in this way?

Our most important insight has been the power of being a community that does not simply support movements, but is also deeply involved in movements. Many of us are donors and organizers and writers and activists. We identify in multiple ways simultaneously and seek to break down the barriers and awkwardness that often exists between funders and grantees. This takes work and honesty, and intentionality around building relationships, but it has been deeply liberating and gratifying.

Solidaire has been an incredibly important, primarily in building a community of like-minded individuals who are committed to a common goal. By being in community, we are able to learn and accomplish so much more than we could on our own. Instead of relying on our own knowledge or judgment, we have a host of others to turn to for insight and advice. And because the identity of a funder is unique and complex, it has also been a source of strength to work together.